When I was younger, I used to dream of having multiples. Specifically, a little Brandon-and-Brenda pigeon pair to instantly complete my family.* So staunch was this fantasy that not even repeated exposure to various doomed Virginia Andrews twins could budge it.

I didn’t end up having twins after all – and I made my peace with it. However, my lack of Brenda and Brandon has given me scant understanding of what it really means to have multiples, resulting in many thoughtless comments over the years that I now recognise as being supremely irritating to my friends with twins.

So to all my my friends with twins, I write this in your honour (with a side order of apologies). 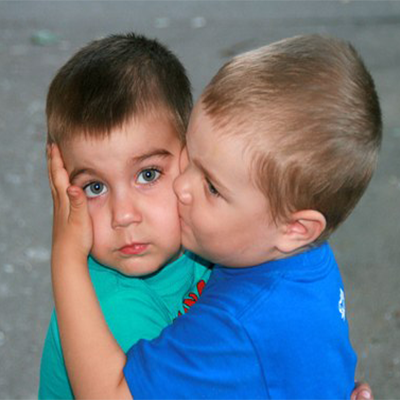 Extra points if you say this to Dad.

Are they IVF babies?

Yes, we get that IVF is responsible for the surge of multiple births recently.

However, you’re basically asking me about my sex life, which I will gladly go into if you pay me by the hour.

Do twins run in your family?

I see right through your thinly-veiled attempt to work out if they were conceived by IVF or not.

(Apologies to those of you who genuinely wanted to know if twins ran in our family).

How do you tell them apart?

Note: If you say this about twins who have different coloured hair, heights or genders, you will sound a bit stupid.

Oh no, sorry to hear that!

Believe it or not, I might be happy about this. So please don’t reduce my ‘spare’ child to an unwanted extra.

I know what you mean! I had kids a year apart and it’s the same thing.

Gee we’ve never heard that before!

I would hope so. But there are no guarantees.

They could also be too close – like Cersei-and-Jamie-Lannister close.

There’s nothing like being a twin to makes you more susceptible to being compared to another human being constantly.

By all means, ask a twin or their parents this question. But only if you’ll be equally willing to ask Marge from payroll if she’s the uglier sister, or your accountant Gary if he’s the naughty one.

Which one is evil?

A variant of the above, for those who watch too much Bold and the Beautiful.

*For those of you who are avid readers of my blog and know everything I’ve written by heart (!!!), you may have noticed that I spoke previously about my younger self’s future babies being five girls. However, that was strictly in the context of coming up with pretty names. Realistically, five kids would be… yikes. And on that note, watch out for a blog called “Things you should never say to a parent with lots of kids” coming soon – also with a dose of Crew Captain mea culpa.