Given that the school backpack is a key part of any back-to-school items list, one might assume that schoolkids have been using these since the dawn of compulsory schooling.

Knowing this, I now feel even more sorry for those poor little mites of yesteryear. On top of having to contend with the six mile daily trudge to school through the snow wearing only one shoe (or 10 miles in the blizzard with no shoes, if you listen to Great-Uncle Cyril), they had to do all this sans a backpack to carry their things in. Ouch.

Here is a brief history of the school backpack, which should serve you well on the next trivia night.

AKA the book strap era.

The book strap was as its name suggests. Students would wrap the belts around their books and then carry them around or sling them over their shoulders.

Not surprisingly, it wasn’t long until these fell out of favour.

Unlike the doomed book strap, the true ancestor of the modern school backpack sprung from an enthusiasm for the outdoors. Gerry Cunningham invented the first zippered backpack, primarily designed with rock climbers in mind.

Gerry Cunningham continued to improve upon his initial design by using nylon. Previously, canvas was the material of choice for bags, but nylon proved lighter, more durable and water resistant.

This development spawned many outdoor gear companies, one of which was JanSport. When JanSport developed their Ski and Hike day pack, the company initially approached outdoors-focused shops. Coincidentally, one such shop was connected to a university bookstore in Washington. Given the amount of rain in this region, students began to see the value of a water resistant day pack to transport their books and other belongings around.

This year saw the first backpack that incorporated book measurements in its design.

Despite this, school-friendly backpacks were not yet widespread.

This is where historical accounts diverge.

Children in Australia, the UK and the like have been documented using leather satchels for school. These were not specifically designed for children though, as their fathers likely used similar bags for work. 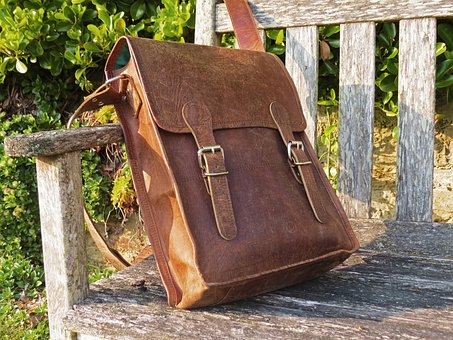 However, in the US, it was a different story altogether. Layperson sources claim that it was common for students to simply carry their books around in their arms. While rather inconvenient, the upside was that it facilitated the classic oops-silly-little-me-I’ve-dropped-all-my-books seduction trick that features prominently in American high school movies of this era.

The first backpack specifically for textbooks was designed by JanSport.

By late 80s, almost every school kid was using a backpack.

After this time, the backpack continued to evolve to include design elements such as deeper pockets and more compartments.

The use of licensed characters on bags also exploded in popularity.

High school students are increasingly reliant on technology, so backpack designers are incorporating these needs into their creations. From bags that provide one handy place for all your cords, to backpacks with a ‘tablet window’ (so you can view and use your tablet without having to open and take out anything), who knows where the backpack future will take us? We wait with bated breath… (or maybe that’s just me). 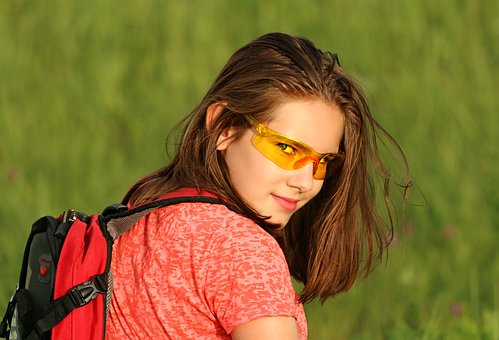 STUCK ON YOU HAS STACKS OF BACKPACKS!!!

Check out our various designs here. 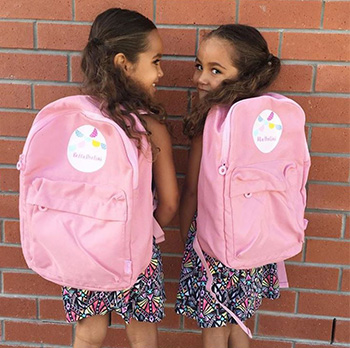 THE FOLLOWING SOURCES WERE USED FOR THIS ARTICLE