Are you and your partner having trouble agreeing on a baby name? End the standoff now with the following strategies!

Make a top 10 list each, then cull each other’s lists down to 2-3 names and negotiate from there.

Another approach (which can also be used alongside the favourites list approach) is to think of all the names you DON’T want.

This could potentially be a very very long list, so for the sake of efficiency, try to categorise names broadly, e.g. no names ending with “a”, no names that sound like they belong on a senior citizen, etc.

ALLOW ONLY A CERTAIN NUMBER OF NO-GOES AND VETOES

Now that you’re clear on the names you like and don’t like, you can start putting forth your ideas.

This is potentially the most dangerous stage of your baby-name-choosing process/relationship/marriage.

Because when it comes to choosing baby names, it is a truth universally acknowledged that each party will veto the other’s name suggestions. Many many times.

To help keep things under control, limit the vetoes to 5-10 each plus a few backup vetoes for names you’ve forgotten you really hate, or for when your partner throws in an unexpected doozie that you fear might not be just a bluff, e.g. Dorcas, Sausagea or Brumhilde (yep, that’s Brunhilde with an ‘m’).

Be mindful of using your vetoes wisely because the last thing you need is to run out of these before your partner does, therefore dooming you to a child named Trigby.

To help prevent no-go and veto wastage, consider the following:

Is your hatred for the name justified?

What exactly do you have against the name Jonathan? Is it because you had a bully by that name who made your teen years a living hell that only expensive therapy could help you escape? If yes, then by all means, nix the name.

However, if the maligned namesake’s alleged misdemeanour was relatively minor – e.g. he was your  next-door neighbour who liked to chew his toenails and spit them out in your garden – then perhaps just suck it up (the name choice that is, not the toenails), especially if the name is really important to your partner. We promise, you will make new and positive name associations with your own beloved little Jonathan – even if he also chews his toenails and spits them out in the garden.

Do you have a history of changing your mind about names?

That’s a nice way of asking… are you fickle?

While fickleness is not normally a trait that’s viewed as positive, it can be extremely helpful in this context.

When you flinch in response to your partner’s name suggestion, remember that you are responding to how you feel right now about that name. But that doesn’t mean you won’t grow to love it, especially if you’ve historically had a tendency to change your mind frequently about names you like or don’t like.

To illustrate with my own example, many of the names I gave my fantasy future children (all girls for some reason) when I was aged 5, 10 and even 25 make me cringe now, and neither of my actual children bear any of those names – my son, especially. Conversely, there are names that wouldn’t have crossed my mind back then that I think are cool now. 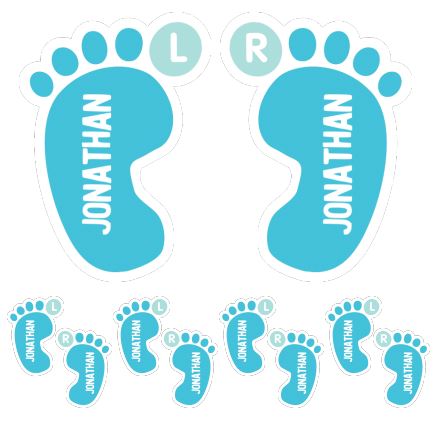 Image: Personalised shoe labels from Stuck On You.

SO YOU’VE REACHED THE STAGE WHERE YOU’VE NARROWED IT DOWN TO A LIST OF REASONABLE NAMES THAT NEITHER OF YOU HATE. NOW WHAT?

First things first… Do not, I repeat, DO NOT take it outside. You’ve shed blood, sweat, tears and perhaps even a small trickle of urine* to get to this point. Do not ruin it by asking for outside opinions. This can only result in a wider pool of people who hate a wider pool of names for a wider pool of stupid reasons.

Here are some ways to nail down that perfect name that will be on your child’s birth certificate until they are old enough to change it by deed poll.

HOW TO FIGHT FOR A NAME YOU REALLY WANT

What if, after all the attempts at compromise and reasoning to yourself that naming your child after a toe-biter is not that bad, you still resolutely want a certain name for your child? Say you really really like the name Rigoberta… but your partner does not. How do you convert them to your (totally superior) way of thinking?

Here are some strategies you could try.

1. Pretend to hate the name. Yes, reverse psychology is one of the oldest tricks in the book, but it could work wonders if you’re lucky enough to have a petty and immature partner.

2. Remember the advice we previously gave you about how to let go of your hate for certain names? Why not apply this advice to your partner? Tell them to stop being a wuss/snob/fickle twit and just like the damn name already!

3. Tell them that naming your child Rigoberta will honour your beloved aunt/great-granny/family dog (Note: This works better if actually true. If not, try to use someone whose existence cannot be easily disproved by social media – the older or less human, the better).

4. Use a search engine to show your partner Nobel Prize winners, snooker champions and philanthropic princesses with that name. 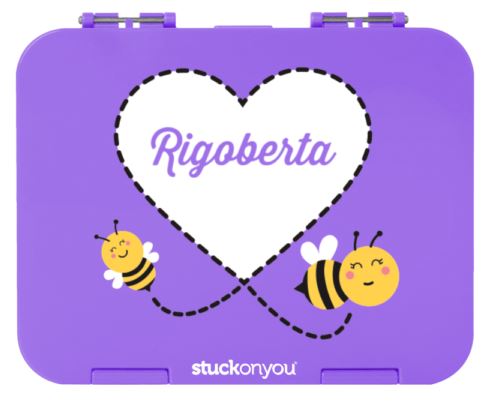 Image: Personalised Bento Box from Stuck On You.

HOW TO FIGHT AGAINST A NAME YOU REALLY DON’T WANT

What if it’s your partner who absolutely insists that you name your child Humphrey, but you just… can’t? How do you turn them off it?

1. Allow your eyes to glaze over while you coo dreamily about that magical night you spent with a hot surfie named Humphrey (or Hump for short, which he certainly was not, if you know what I mean).

2. Use a search engine to show your partner disgraced footballers, drug smugglers and ranting public transport racists with that name.

3. As a last resort, employ good old-fashioned guilt. If you are the parent whose body is being put on the line to grow this new human, and/or if you’re the parent who’s forfeiting the use of your surname for this child, then you WILL have the final say – so ix-nay on the Umphrey-hay, mmmkay?

If, after all these strategies, you’re still struggling to agree on a name, why not shelve the task until bub is born? Because chances are you’ll take one look at your new little bundle and he or she will just look like a certain name (and likely one that neither of you had considered). Depending on where you live, you will have about two months to finalise your baby’s name after birth so there’s no huge rush.

Alternatively, if you have managed to choose a name and are now awash with second thoughts, take heart that what you’ve named them won’t really matter beyond a certain period of time. I mean, think about the last time you were introduced to an adult – say a new work colleague or someone in your Mother’s Group. Did you think to yourself, “Ew, Pam/Deb/Graham is SUCH a stupid name”? You probably didn’t. Because once a person hits about the age of 2, no one will give a fig what they were named. It’s only tiny babies/pre-babies whose names are placed under such scrutiny.

So stay strong. At worst, you might have to put up with a few years’ worth of people judging your child’s name. However, after a certain point, their name will just be accepted as it is.

Unless that name is Muffin Hat.